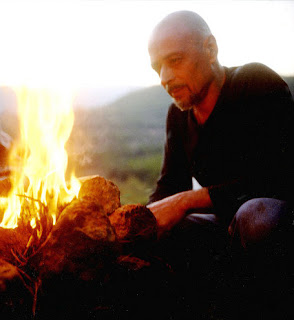 Carlos undergoes a long journey of dedication and services from the social and politics conscience to the planetary and spiritual conscience.

He studied psychology and sociology in the National University of Humanities MDP Argentina. Active member of the resistance to the military dictatorship he got kidnapped by the army and kept in a concentration camp during 1976-79.
He escaped to Brazil and he arrived to Stockholm as political refugee, with aid of the UN.

There starts a long period of healing and return to life. Using art, music, poetry, dance, percussion and theater as vehicles conscientious evolution.
The drums take him to his first meeting with the spiritual knowledge of the people of Indios. He decide to  dedicate his works in the recovery of the harmonic relation of the man with the Mother Heart, the Elements and Cosmos.

He studied fine arts at Nickelvikenskolan. Singing, Guitar, Percussion, Poetry and Theatrical Pedagogy in Sweden,
Vice-director of the Theatrical Jovens-Var theater.
Creator and director of the legendary Rinkeby Skolan Samba, with over 500 members of all the age and diverse nationalities.
Group born in the street and arrives in the Dramatic Institute Art of Stockholm.

He has passed the Ceremonies of Four Years of Vision’s Search.  He has been to the Tree of the Life in the Sun Dance (Chalmita-Mexico) and he has received the blessing and authority to direct Temazcales and Medicinal’s Ceremonies.

Creator and draftsman of events in Nature where the limits between Art, Ritual and Therapy do not exist.
The Path of the  Heart, Senkawa, Real and Arte and SoulandArt are the tools that he developed to synthetizes and shares its experience.


Currently facilitates Temazcals and Medicine’s Ceremony in Spain, Portugal and Italy. Member of the team of teachers of Interart-Barcelona.

Creator of method EMC- Collective Musical Expression. He form instructors and facilitators to compose & improvised music with “Not musicians”.
http://www.soulandart.net/site/